After a lot of planning I left for my solo motorcycle ride from Bangalore to Hampi, Gokarna, Murudeshwara and Jog Falls. I started from Bangalore on Feb 22 and came back on March 1. I rode around 1400 kms. This post is a travel log. There is enough information available about all these places on the internet.

**Started at around 6:15 am to Hampi via Chitradurga. Reached Yesvanthpur around 7am. There was a huge traffic jam on the railway crossing. There was another solo rider who helped me through some other route to NH4 ended up wasting 45 minutes due to the jam. I stopped after the toll plaza to get some breakfast. After that I headed to Chitradurga on NH4. The roads were too good and I was cruising at 100-110 (that’s the max speed on avenger, beyond that it starts to vibrate). Reached Chitradurga around 10:30. I stopped to get some rest. My tail bone pain had started to reappear. 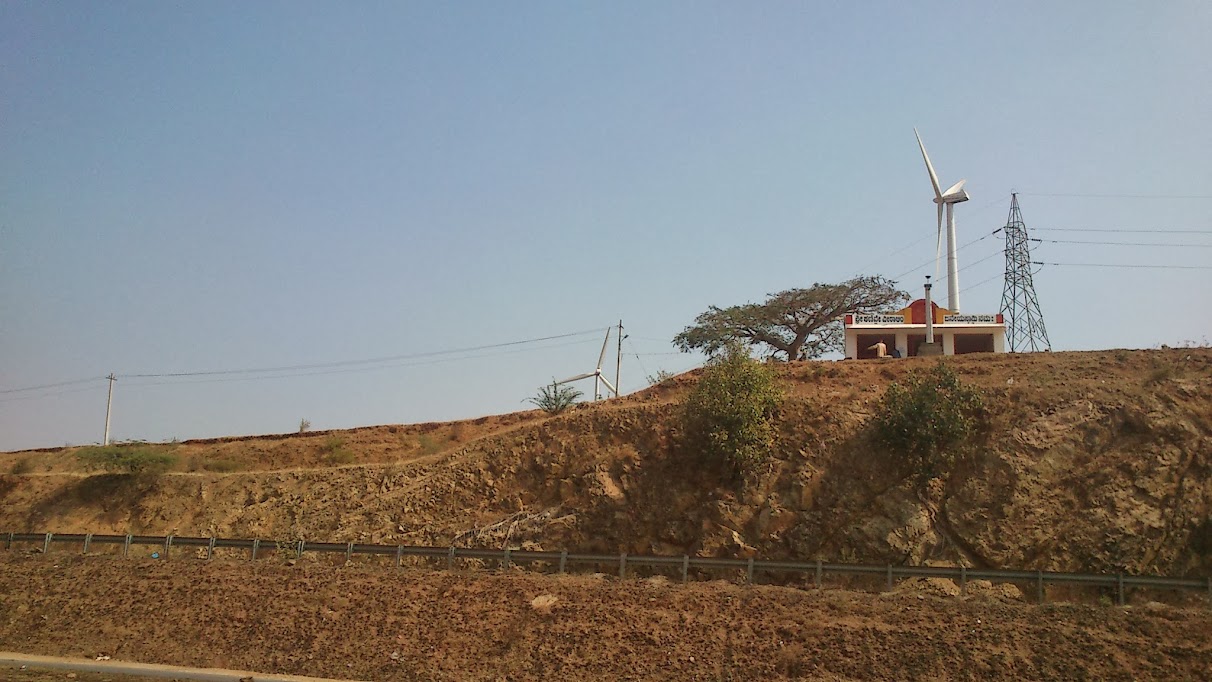 From Chitradurga I took NH 13 to Hampi. The roads were okay but since it was only a two lane road and there were too many trucks, riding was really a pain. Also it looked like a huge chunk of barren land, almost like a desert with only a few villages around. I reached Hospet around 2 pm, could barely ride any more. I took a hotel near the bus stand and went to bed.

Here is a shot of Tungbhadra reservoir. Woke up at 7 pm, went for a walk. Hospet is ideal place to stay in you are visiting Hampi, its cheaper and there are lots of options to staty. Hampi is around 12 km from Hospete. 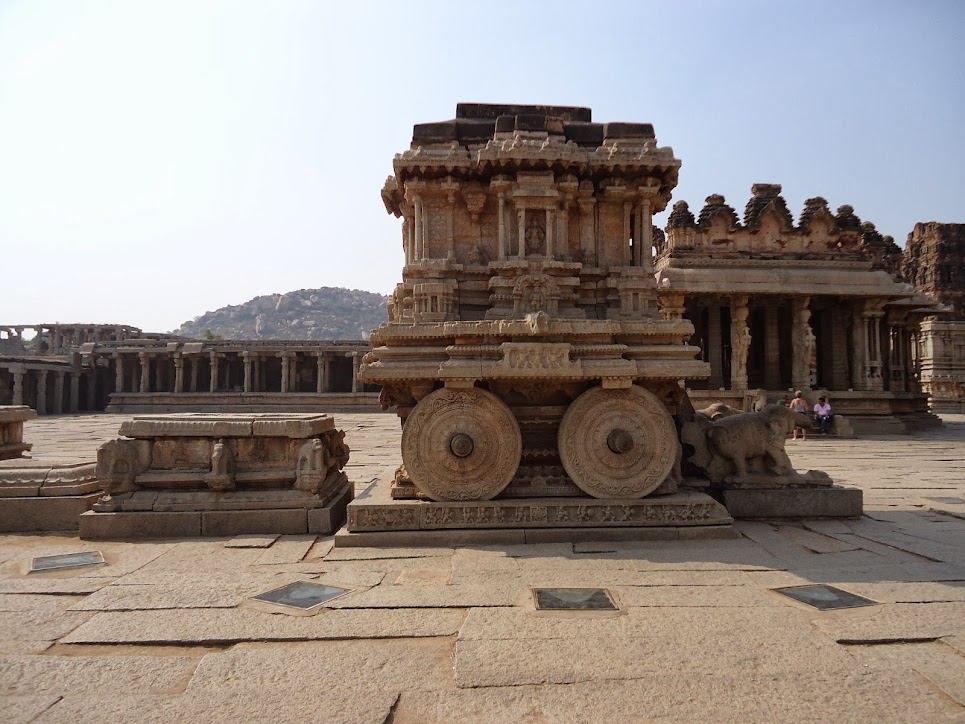 Went to Hampi at around 6:30. The ruins of Hampi were very beautiful. I had not seen such good stone work. One of the temples is still used for worshiping. It is a heritage site and they should have let it go.

It was another long ride of around 330 km so started at around 5:30 am. I headed towards Gokarna from Hospet via Gadag-Hubli-Yellapur. 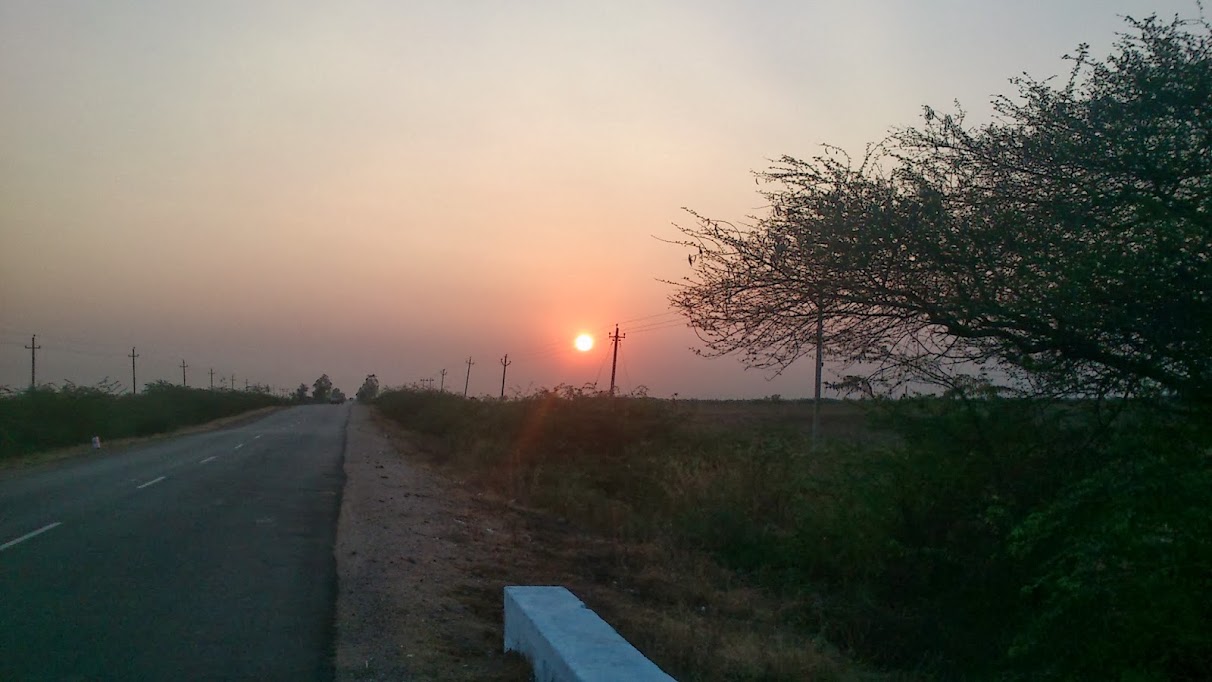 This was a better ride than Bangalore to Hampi. The beautiful western ghats made me stop at lot of places to look around and click photos. 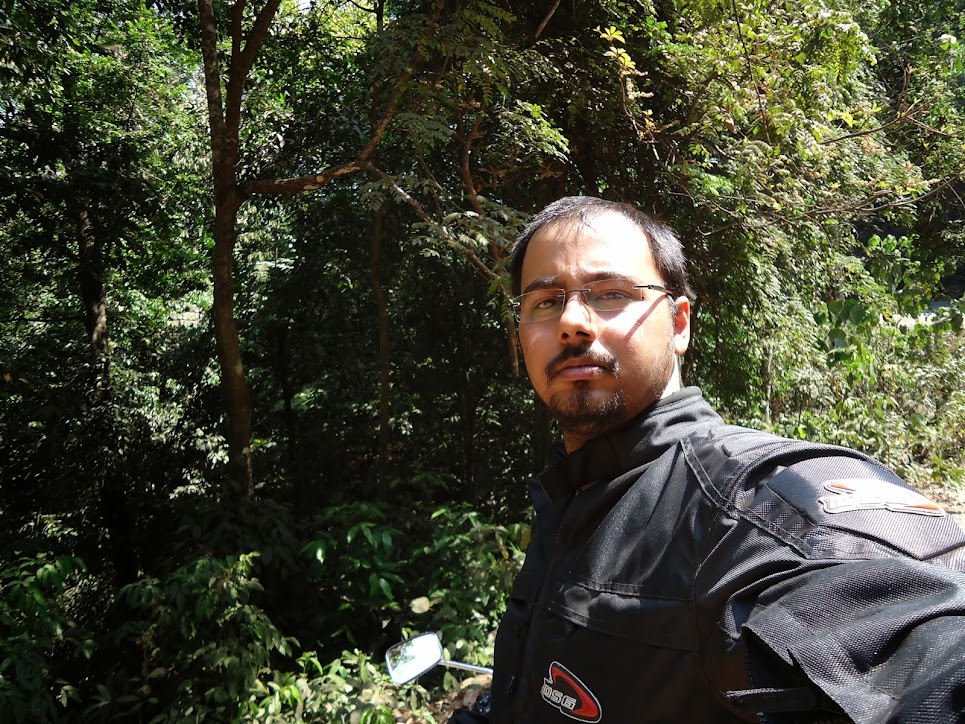 <figcaption class=”wp-caption-text”>Somewhere in the woods near yellapur. I was not angry </figcaption></figure>

Reached Gokarna around 2 pm. Negotiated for the hotel room and managed to get one for 1000 instead of 1500. It was a weekday so it was easier to negotiate. Dozed off soon after having lunch and woke up after it was dark. Went to Namaste Cafe on Om beach, there were hardly any people so came back soon after a while.

Went to Om beach to see the sun rise. All I could see was the sun, the beach and firangs (foreigners). I could not see a single Indian except the locals. And all them were doing some weird kind of yoga. Then I went to Namaste Cafe and had some pancakes. That’s the place to be in Gokarna.

In the evening went to Kudle beach and played volleyball with the locals and then came back to the hotel. After that I started googling on what to do next. I found out that Murudeshwara has scuba diving so I made some phone calls and booked myself a dive.

This was only a 70 km ride but it was really beautiful. The views are so beautiful that you could just sit down and see everything around you. The foggy morning made it more beautiful. 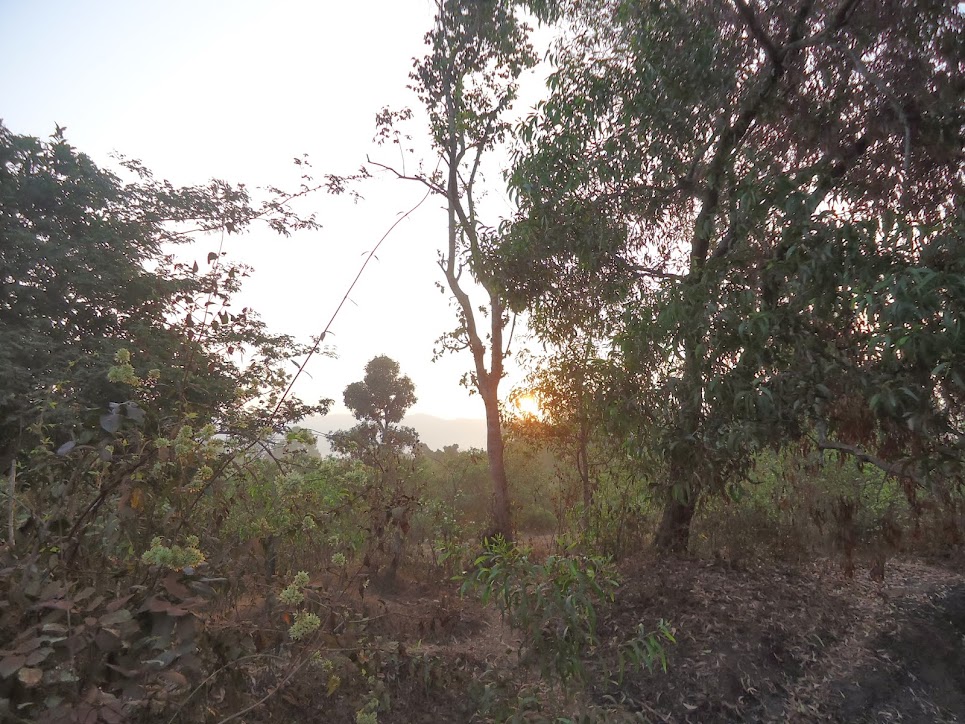 Reached Murudeshwara around 9 am and headed to beach.

Went to RNS residency for briefing on diving and then they took me to the swimming pool to learn how to breathe underwater and a couple of more exercises. And yes they use the same signal underwater as shown in “Zindagi Na Milegi Dobara”.

After that we went to Netrani Island on a boat which is the diving spot. It is around 20 nautical miles from the beach. The boat ride in the ocean can give you a heart attack if you have not done it before. I just tried to look normal and grabbed the wooden seat on which I was sitting. We also saw two dolphins jumping out of water If you are on airtel or vodafone you will get mobile signals which really amazed me.

The dive was wonderful. I have no words to describe it. I had lot of problems dealing with the ear pain due to change in pressure. It took me a while to equalize it. But as soon as I saw the fishes I forgot the pain. I swam with the fishes just like you see on discovery channel. This was my first dive and I am sure that I am diving again.

I thought that Gokarna to Murudeshwara was the most beautiful ride, but Honnavar to Jog can easily beat it. 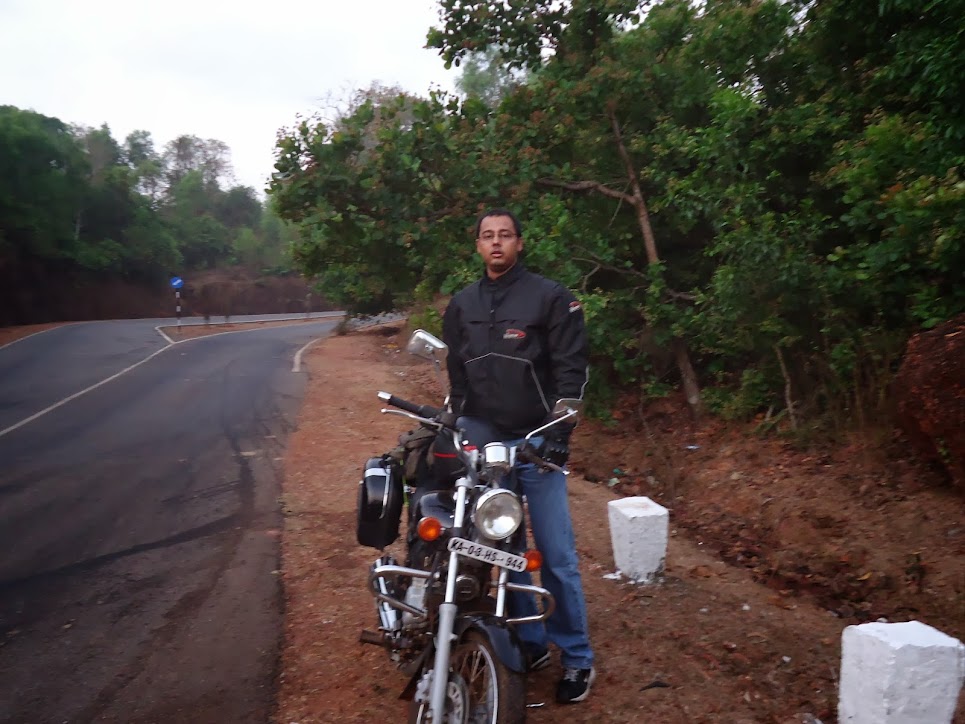 The most beautiful view of the entire trip. 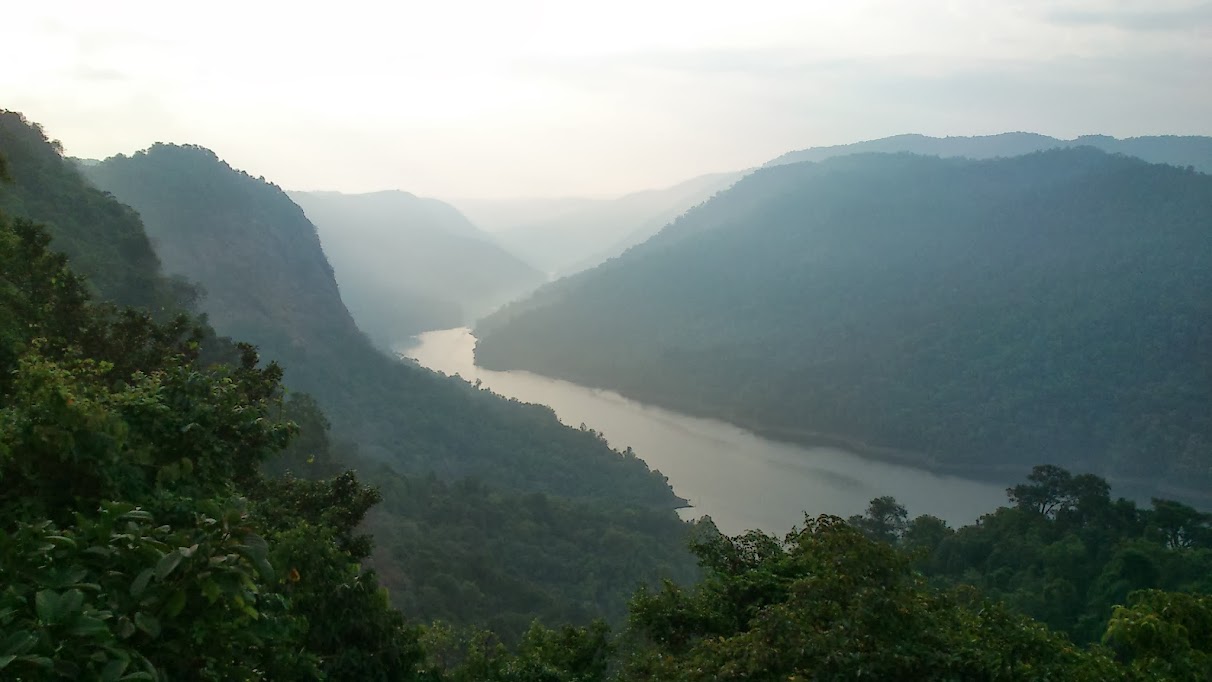 I stopped at Jog and had breakfast. There was very little water right now. From there I went to Shimoga. On the road to Shimoga I saw an advertisement for Shimoga wildlife safari. I went inside. It is a small safari good for kids only.

Bangalore was still 300 km away and my bums had started to hurt, so I decided to ride another 100 km. I went to Arsikere instead of Chitradurga which was a big mistake. The road from Shimoga to Arsikere was really bad. Reached Arsikere around 4 pm. Found a hotel to crash.

Headed to Tumkur and then Bangalore. Wish I could continue longer. Reached home around 11 am.

If you have read so far, a big thanks to you This was my first long ride and that too solo. Also I have come to realize that now I can travel to anywhere alone. I do not have to press my friends to come along. And as an experiment I had not booked hotels, it was not hard to find hotels and travel sites charge way too much. Most of the hotels that I stayed in were good.